A critical part of any build. By Matt Clark

If you’re ready to embark on the exciting and sometimes intimidating task of building a new gaming PC, it’s easy to get caught up in the hype of graphics cards and processors. Don’t get me wrong, those really are two of the most important decisions you’ll make during your build. But it’s sometimes easy to overlook the very “glue” that holds those components together; the motherboard. Mobos can be a confusing mess of sockets and chipsets to some, so we’ve created this handy guide and done all the legwork for you. Here are the best motherboards for gaming at any budget. 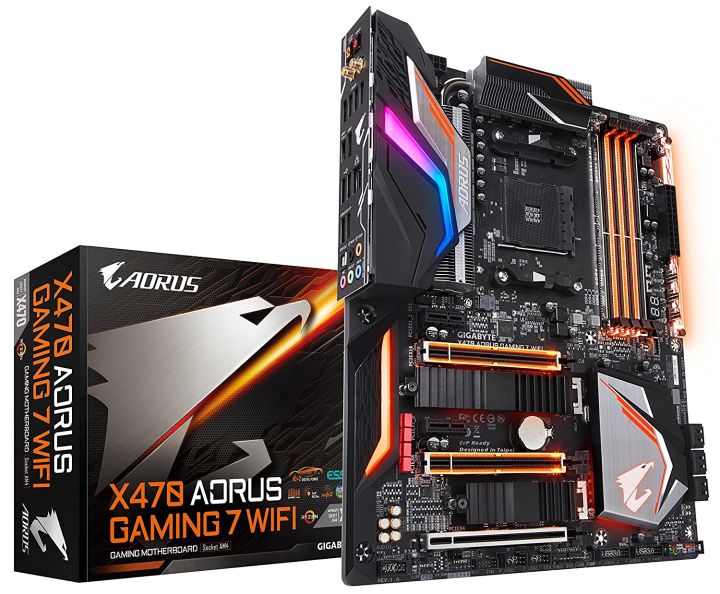 If you’re building a new AMD-centric rig or just updating an existing PC with the new second (or first) generation Ryzen processors, you’ll be hard pressed to find a better motherboard than the Gaming 7 WiFi. With a AM4 socket to handle that speedy CPU, an AMD X470 chipset, and support for both SLI and Crossfire graphics card setups, this is what you’ll need for a higher-end, modern AMD build. As the name implies, there’s WiFi on-board and it supports super fast RAM speeds. Plus, its multi-zone lighting will look great in a stylish, new ATX case.

While it doesn’t pack quite the same features as the Gaming 7, the Gaming 5 motherboard is certainly no slouch. You still get the modern AM4 socket compatibility and support for dual-channel DDR4. The light show is still multi-zone (albeit not as extravagant), and the subtle white accents on the board easily complement almost any setup. There’s also an M.2 slot for speedy SSDs and dual Realtek audio ports as well. Plus it has just enough RGB for most gamers’ tastes, but it’s not overdone.

Getting a motherboard to work with the latest Ryzen processors doesn’t mean you have to spend a fortune. Asus’ B350-F packs a punch for the price, including an AM4 socket, surprisingly detailed overclocking options, and a lighting scheme that takes advantage of Asus’ Aura Sync lighting system to coordinate RGB lighting across multiple components/devices. There’s also a single M.2 slot and support for up to 64GB of DDR4 memory.

If you’re looking for a great board capable of handling Intel’s Skylake-X and Kaby Lake-X processors, the Gaming 7 is absolutely packed with features. Admittedly, at almost $300 price is kind of a huge factor here, but if you’re going with an expensive Core i9 processor, you’re probably already prepared for the hit. On the plus side, the Gaming 7 offers three M.2 slots, four-way GPU support for Nvidia or AMD cards, and 8 x DIMM with up to 128GB capacity. Its RGB lighting is also just as a decadent as the rest of the board.

While Gigabyte is certainly stealing a lot of the limelight these days, Asus is still one of the top motherboard manufacturers on the market, and the Prime Z370-A is hard to beat in terms of price and functionality. The LGA 1151 socket supports Intel’s 8th generation processors, so you’re future proof (as much as anyone can be) in regards to picking up a new Coffee Lake CPU. Plus, you’ll get two M.2 slots and four DIMMs for up to 64GB of memory. And if you’re looking to put on the show, this board is compatible with Asus’ Aura Sync lighting tech.

Don’t look at the high prices on some of these motherboards and start squirming about how you’re going to also afford a graphics card. While it may not come with all the bells and whistles of a $200 motherboard, the B250M Gaming Pro is still a workable option; especially if you’re saving money on a compact micro ATX build. Granted, you’ll need a sixth or seventh generation Intel CPU thanks to the LGA 1151 socket, but that also means you’ll save some cash on that front, too. And you’ll still get lighting options and an M.2 slot.

Smart Home Gadgets That Can Make Your Life Easier

July 16, 2018 admin Comments Off on Smart Home Gadgets That Can Make Your Life Easier

Signs You Should Invest in Digital Gadgets

July 5, 2018 admin Comments Off on Signs You Should Invest in Digital Gadgets

8 Clever Digital Gadgets to Have in 2018

Xiaomi eyes expansioninto the U.S. in 2019

admin Comments Off on Xiaomi eyes expansioninto the U.S. in 2019

The weather station for the home: features of the “smart forecasts”

September 3, 2018 admin Comments Off on The weather station for the home: features of the “smart forecasts”

What We Think Apple Has in Store For The iPhone

Where to Stay in NYC When Visiting

3 Great Apps To Help You Get Quality, Daily News

The Best Motherboards for Gaming

Comments Off on The Impact of Technology on Business